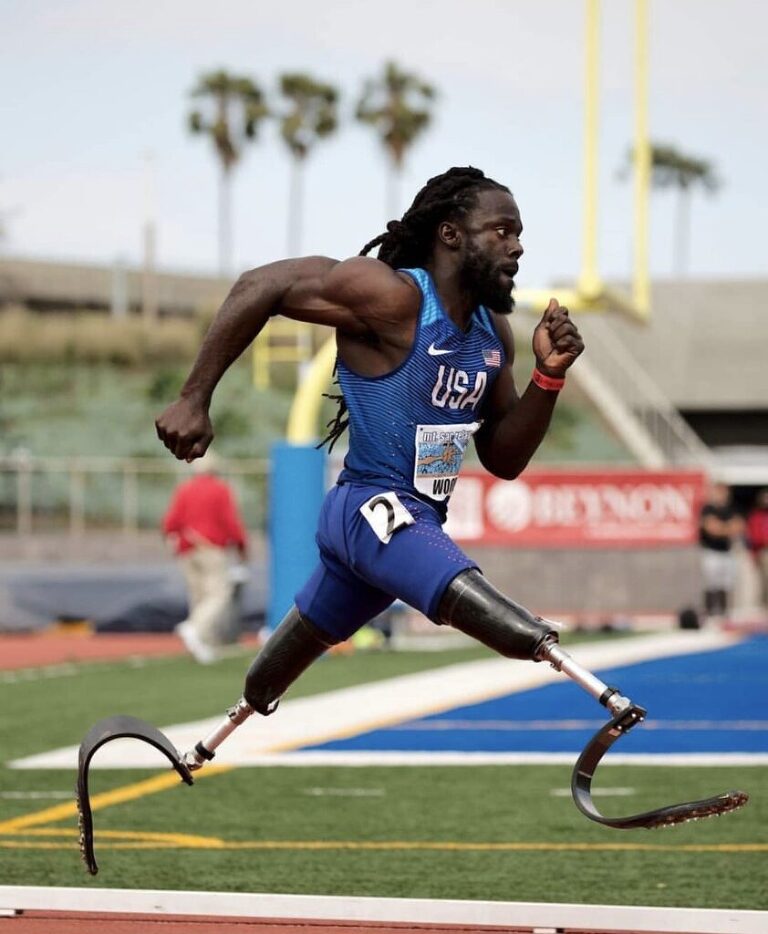 At first glance, Regas Woods doesn’t appear to be an elite athlete, a Pan American Gold medalist. But never look at looks. The Dunnellon-based athlete has been defying the odds his entire life. The bilateral above-the-knee amputee competed in the 2016 Paralympic Games in Rio Di Janeiro in both the 200 meters and long jump. Woods has never been one to let his disability get in the way. The multi-discipline athlete was born with a congenital abnormality as his tibia and fibula failed to develop properly. A decision of great gravitas had to be made, one that would alter the complexion of his life. “It was the choice to either put in rods or amputate,” said Woods. “They could do it when I was 6-years-old or 2-years-old. My mother chose to do it when I was 2-years old (having both legs amputated above the knee), so I wouldn’t remember the surgery, which I don’t.”

Mobility presented its own set of demands – something Woods referred to as a learning process – realizing he would have to learn things a bit differently, which at times was challenging and frustrating. “Those were the cards that I was dealt,” said Woods. “I played it to the best of my ability. I got my first set of prosthetics when I was 3-years-old. We actually have them in a trophy case at my mom’s house.” It was something that he did early in life that taught him about balance and helped strengthen his upper body, variables that would come into the equation years later when he turned his attention toward athletics. “I used to ride around on a skateboard in the neighborhood all the time,” said Woods. “I used my hands and arms and stuff a lot. I developed a lot of strength from that. I was always active and outside, doing something sports related. I had no idea I would be running.”

One person in particular made a huge impact on Woods’ life: his coach, Jim Beach. “I was at a school in Orlando, an elementary school called Lake Silver, and that’s where I met him, said Woods. “The school was designed to wean in the kids with physical disabilities with the able-bodied kids. So, they had this thing called the Junior Orange Bowl game that he entered. It started out like a little field day type thing. It was track-oriented and I started traveling with that team. I haven’t turned back since. I started running and competing when I was about 10-years-old. “

Athletics gave Woods a sense of self-worth, providing him with a challenge, and his success in running fueled his desire and his evolution and set him on a path where the 39-year-old continues to learn to this day.

“I was running before they came out with the actual running prosthetics,” said Woods. “They call them blades. They’re actually a running prosthetic foot. It sounds cooler when they say blades. I was around when the first generation of blades came out. I had a chance to try all that stuff. I actually used to run on regular walking feet, which isn’t good for running, but that’s all they had until they came out with the new technology, and technology keeps evolving.”

Woods would continue his sojourn, competing in running events, attempting to make the U.S. Paralympic team in 2004, 2008 and 2012, but didn’t succeed in attaining his goal. For most people, that would be enough to stop trying, but it just seemed to motivate Woods, whose confidence in himself is only rivaled by his faith in God.

His perseverance would finally pay off, as he made the U.S. Paralympic National team in 2013, providing him with his first opportunity to compete overseas in England.

It was while he was at the elite training facility in Chula Vista, Cailf. in 2013, where he added the discipline of long jumping to his portfolio. Woods had already been competing in the 100 and 200 meter running events, but it was at the suggestion of the facility’s resident coach, Jeremy Fisher, that he began practicing in a sport he had never thought about previously.

The year 2013 was pivotal year in Woods’s career: making the national team, something he would repeat in 2015 and 2017. Prior to that, he was just an adaptive sport athlete.

“Just because you have a disability, doesn’t mean you’re a Paralympian,” said Woods. “A Paralympian means you have qualified at a national championship or a trials, and you have made the team, and have went on to represent the U.S.”

Woods’s story is about how he has consistently risen to the occasion, overcoming adversity to succeed. At the World Championships in 2015, a miscalculation in which he didn’t get his chest up to jump correctly, found him over-rotating, landing on his side and breaking a rib. After the jump, he told his coach that he believed he broke his rib. His coach, Ocala’s Tony McCall suggested that he stop competing, but Woods was far from through, having sacrificed so much to reach this particular stage. He concealed his pain, continued on and secured the bronze medal and winning the semifinals of the 200 meters that same night. He ran off of pure heart and adrenaline.

“I showed the world that no matter what, never give up.”

He would go on to capture the gold medal in the long jump and silver in the 100 meters at the 2015 Pan American Games.

However, the amount of sacrifices athletes and their families make for their dreams to become reality can be heartbreaking, and for Woods it was no different. In 2015 Woods lost his job as a prosthetic technician at the company he had been working at for 15 years. They weren’t interested in supporting Woods for his Paralympic endeavors, even though he represented who they were.

“That was my only means of taking care of responsibility,” said Woods. “It was the only thing I did for 15 years, but it was a blessing in disguise.”

The untoward events were on his mind at the Paralympic Trials and the stress was enormous, knowing that if he didn’t perform well he would have to wait another four years to make the team. Woods had sacrificed a great deal and reached this stage without sponsors, endorsements or an agent. 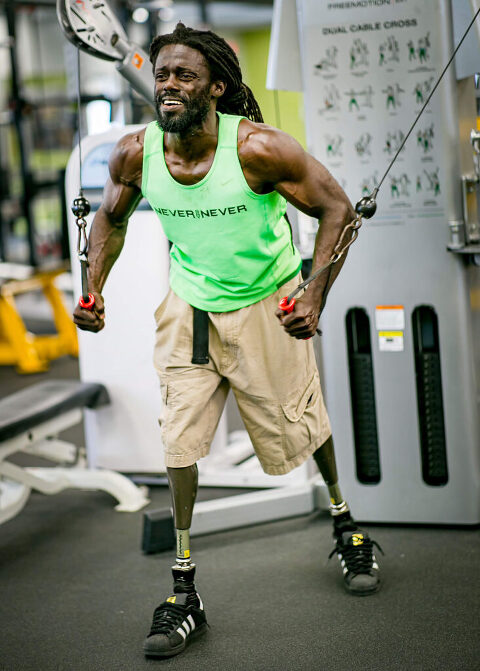 “I just went out there on faith and was going to make it,” said Woods.

But as fate would have it, pitfalls would once again beset Woods. Coach McCall had already emphasized the importance of having a good first jump. The long jumps take a lot out of the athletes both mentally and physically.

Woods started with a perfect run down the runway, then inexplicably he broke both blades and did a front flip into the sand.

“I’m looking down at the blades, and I’m saying, ‘Did you really want to go do this right now?’ So, the official said, ‘Woods, can you continue?’ And off of instinct, and having had it instilled into me to never give up. I told them, ‘yes.’”

Woods had no time to spare, and his prosthetic background began to kick in, he knew how to work on the blades and had a couple of tools in his bag, and although he did have one spare blade with him, the other was back at the hotel. In the spirit of sportsmanship, the other athletes came over to check on him. There was only one competitor who had a blade that was compatible and would retrofit his socket. The other athlete lent him his blade, with Woods promising not to break it, fitting it to his left side because he jumped off his right side. But there was another problem: It wasn’t the best blade in the industry and it was 3 inches too short. But as intrepid as a warrior as Woods is, he didn’t let all those variables deter him. It was as if he was running on a flat tire, but Woods quickly adjusted and his jump would earn him a spot on the U.S. team for the 2016 Paralympics in Rio Di Janeiro.

Woods’ mother Deborah Simon has played a huge role in the athlete’s life. Simon instilled in Woods that he would be able to do all things through Christ’s strength.

It was his mother who taught Woods how to drive a standard shift transmission on his grandmother’s property.

“She told me, ‘Don’t wreck my truck,” said Woods. “She said, ‘You have the clutch, the break, the gas and the gear shift.’ I’m the only one of my mom’s kids that can drive a standard shift transmission. She never taught me to feel sorry for myself.”

Simon always told her son he could do anything he put his mind to, and those are the words he lives by to this day, and a message he tries to spread globally.

It was a proud moment for Simon when Woods was selected for his first national team, with it being the first time he was ever out of the country,

But it was different when Woods was selected for the Paralympic team. His reaction was caught on tape by NBC.

“The camera was right on my face when they called my name,” said Woods. “I just broke down. I’m sure the family did too.”

A propitious event occurred while he was working at the prosthetic company, one that would allow Woods to realize one of his dreams.

A man came into the facility who had been in a bus accident, and he was deeply impacted by the event. He had just lost one of his legs below the knee, and would eventually have his other leg amputated below the knee.

“We got to talking and normally, I don’t go to a patient’s house,” said Woods. “His mom and his parents kept on inviting me over. She said, ‘I had to be more supportive for her son because he hadn’t been through anything like this.’ We became friends, and I said to him, ‘One day, when I get some land, I want to do a foundation, to try to help people.’”

Woods taught the man how to run and walk on prosthetics. One day, while he was at the office, something would happen that would be life-altering.

“I get a call from his mom, and his mom said, ‘Meet me at my accountant’s office downtown.’ I didn’t know what was going on, so when I get there, there was Nick Stilwell (the man Woods had been helping), John Stilwell and Susie Stilwell and their accountant sitting at the table. They said, ‘I heard you want to start a foundation.’ I said, ‘Yeah, one day, when I win a big race, get big and get me some money. I’ll start this up.’ So Nick said, ‘You want to be partners?’ I said, ‘Yeah.’”

Stilwell asked Woods if he could use that name, Never Say Never, a phrase Woods always uses to sign his photos.

“It was told to me, that it was impossible for a bilateral above-the-knee amputee to run foot-over-foot; I was supposed to race in a wheelchair,” said Woods. “It was a gift from the Stilwells for helping their son get his life back and give him some hope. Now, Nick and I are running this foundation, and have been able to bless hundreds of kids all over the world with running prosthetics that insurance doesn’t cover.”

« Quarantine CultureThe Mothers That Made The Man »