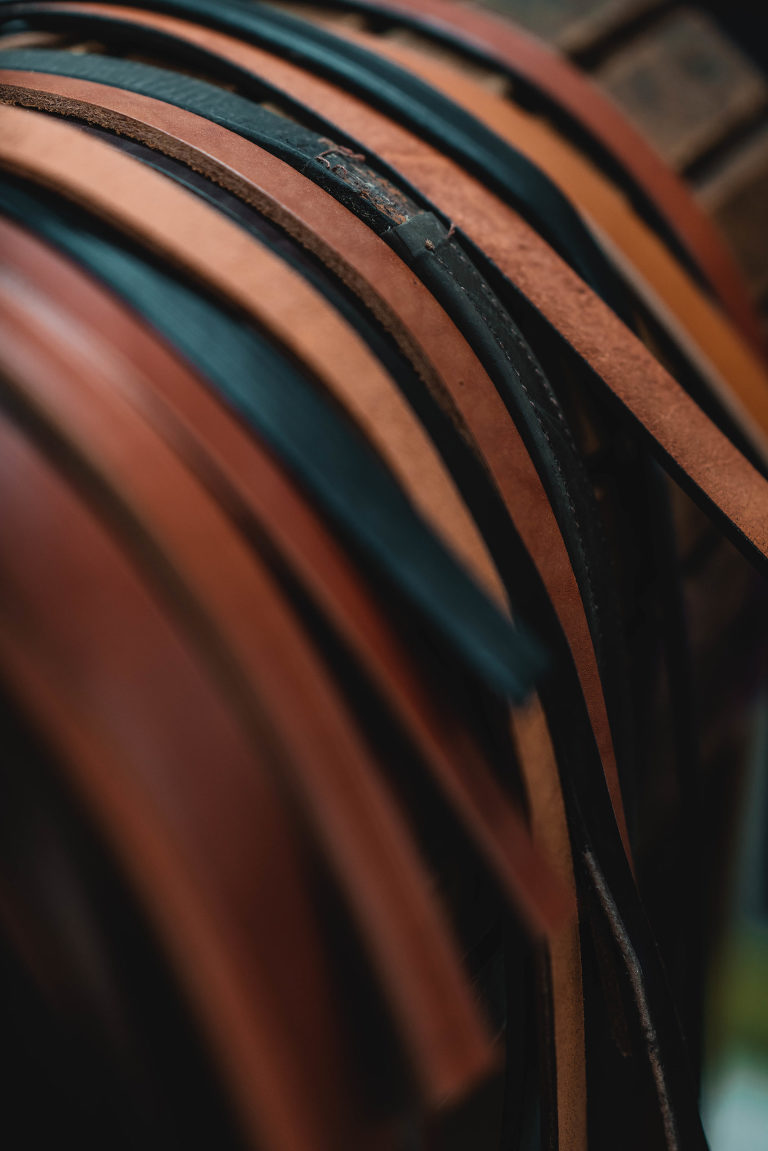 Saddles have evolved over time, from a simple design to its sophisticated present state. Its importance can’t be understated and can play an integral role in a horse’s performance and a rider’s position.

Customization, repair and individuality are important components for those participating in equestrian sport, recreational riding and the extreme conditions one encounters when working on a farm.

In Ocala, there is a workshop dedicated toward horsemen and specializing in custom and repair work, and building and making saddles.

Tack Shack of Ocala has been a staple in the area for more than 30 years and has adjusted and changed with the times to accommodate horsemen and their particular needs. The place is renowned for its Famous Horsey Yard Sale and being the official merchandiser for the Florida Horse Park and Ocala Jockey Club International 3-Day Event.

“We started making exercise saddles because the supplier we used to get them from went out of business,” said Julie Jessee, Tack Shack of Ocala store manager. “We took one of the saddles that we used to buy from the supplier, took it apart, and it took about two years for us to sort it all out. We had the mold made for the trees and got that done.”

The art of making a saddle, whose primary purpose is to protect the horse’s back and enable the rider to maintain balance while allowing for the horseman to shift his weight, takes on added significance. There are people on staff at the Tack Shack who specialize in the customization and making of saddles.

“Horse people want their things customized,” said Marti Haugt, Tack Shack of Ocala owner. “They have their farm colors, barn colors, race colors and they want it to be their own.

The workshop in the back of the main store plays a critical component in the outlet’s business. Experienced horsemen compose the staff at the Tack Shack of Ocala, and their knowledge and expertise allow for them to create and customize saddles, tack, saddle pads, etc…, that are valued by their deep base of loyal customers.  The workshop is open six days a week, Monday through Saturday.

“We listen to our customers and what people are requesting,” said Jessee. The Tack Shack of Ocala also washes and repairs blankets. “If you get enough requests, there’s a need for it. You have to be innovative and creative.”

Hoss Fraiser grew up around horses, and his father was involved with leather work, so he had the opportunity to immerse himself through practical experience and observation. When he was younger, Fraiser used to break and train horses, so making and repairing saddles has allowed him to stay in the same line of work and around horse people.

An average day might find him replacing billets, a piece of tack that holds the girth in place, or rebuilding a stirrup bar hanger that holds the irons on the saddle.

It’s been an evolutionary experience for Fraiser, whose first name is actually Hoss, when working with the saddles.

“I do any kind of saddle, English, western, Australian and side saddles,” said Frasier. “I mostly work on western saddles. I basically build them.”

The side saddles can be a bit challenging, said Fraiser, who now has a global following because of his expertise. His knowledge and ability to replace western saddle seats and the fleece underneath has earned him plaudits from customers because of his attention to detail and craftsmanship.

However, Frasier isn’t the only one on staff who has experience with the craft. It was through shop manager Sheila Greer that Fraiser was able to hone his skills when working with exercise saddles.

“It’s kind of like an art,” said Fraiser. “It comes natural. I like working with leather and braiding. We do a lot of braiding here—back braiding, snaps and chains. It’s a pretty laid back job.” 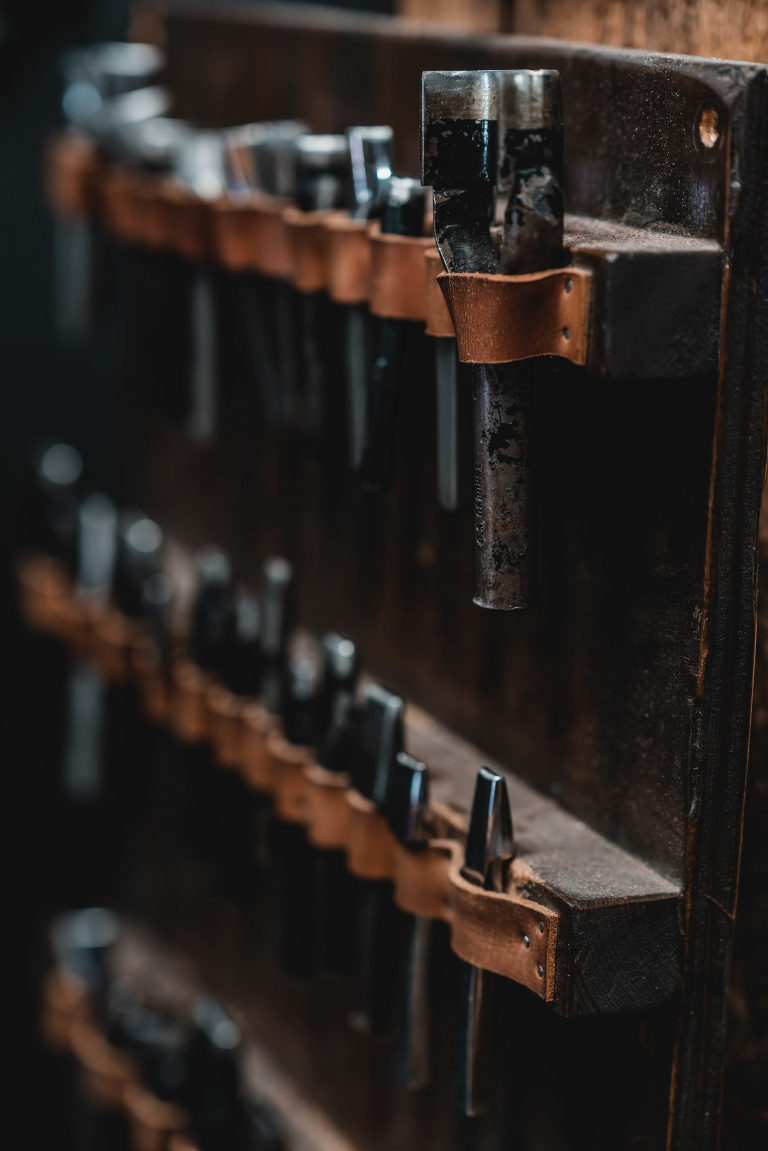 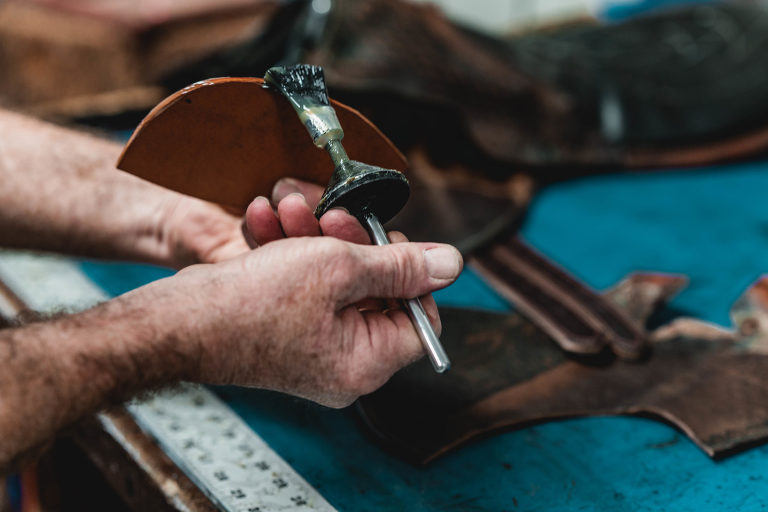 Not limited to just customizing saddles, Tack Shack also makes custom halters, bridles, lead ropes and other items according to Greer, who has been with the company for five years. Practical experience was a great teacher for Greer as she learned from the ground up, improving the previous process.

“What I did was take a saddle apart, and then proceeded to make a pattern of it,” said Greer. “We perfected the pattern and came up with something that worked for us. It was a little bit different from somebody else. We took a little bit from here and a little bit from there to come up with a design that was cost effective, held up well and was easy to make.”

The presence of large sewing machines in the workshop resonate with those making their way back to the area where the leather work is done; they’re powerful and are heavy-duty, designed to handle the stress that comes with heavier stitching on halters, girths, lead ropes, lead shanks and saddles, said Greer. The lighter machines are used for English tack, bridles, martingales and those pieces of equipment with finer stitching.

“Racehorse people want something that’s practical, is good quality and that’s going to hold up,” said Jessee, who said they make a lot of the saddles and tack during the summer, when it’s slower, so they have the inventory available. “They’re riding 10 to 12 horses a day, six days a week. We stock them too. You don’t have to wait three weeks for us to make one.”

Tack Shack has the ability to make different colored saddles such as red, black and blue and can also place embroidered patches on them as part of the customization process. The store’s slogan is the Horse Lovers Candy Store, and their ability to accommodate horsemen of any discipline has become the stuff of which legends are made.

Tammy Bobel has worked in multiple departments at the Tack Shack, starting in customer service then demonstrating her versatility by moving to blankets and embroidery before settling into her current role of customizing saddle pads. Like Greer, she has always liked crafty things. Working with saddle pads has enabled her to learn about Thoroughbred racing.

The staff takes great pride in its work and watches with great interest when a horse is wearing an item made at Tack Shack of Ocala. One horse recently followed intently was 2015 Triple Crown winner American Pharoah.

“We watched those races with our hearts exploding because we made those items for them,” said Erica Rivera, embroidery department head and daughter of a Thoroughbred trainer. “The saddle pads, saddle towels and all of that, we digitized their logo for the embroidery, so we could give them something that’s personal. In the beginning, before they show the races, they always show the horses leading up to the races.

Several items that the Tack Shack of Ocala has made are now on display at the Kentucky Derby Museum.