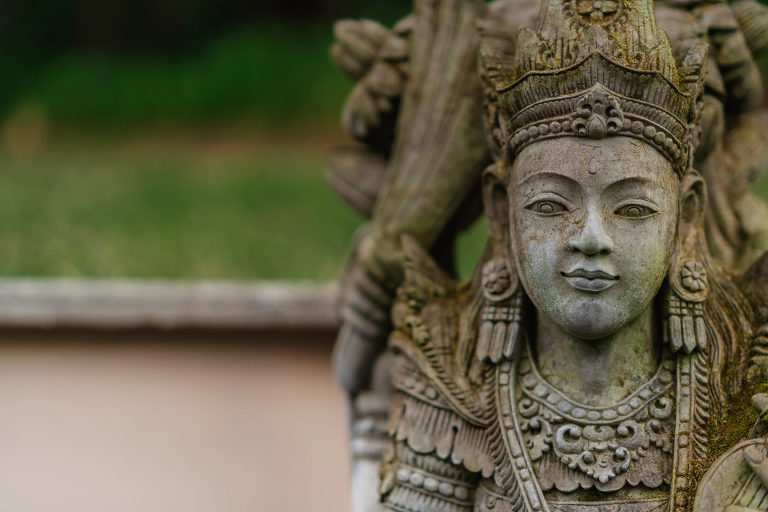 William Shakespeare famously crafted the garden as a metaphor for politics and social constructs, love and romance, even the human psychological and physiological conditions. From Charles Dickens to D.H. Lawrence, Geoffrey Chaucer to the Bible itself, the garden as both a literal and figurative symbol has held a prominent place in western culture and beyond.

When properly nurtured, a garden is nothing less than a miracle and beautiful to behold; when left unattended the garden becomes wrought with weeds and pests, an ugly manifestation providing only a mere glimpse of its potential. The figurative relevance of the garden in literature, though, can only be upstaged by its tangible constructs through lush landscaping and poignant hardscapes.

Since the late 19th century, local green thumbs have sculpted the Ocala countryside and residential terrain into mini oases and garths of solitude and reflection, pleasing to the senses and the soul. As diverse as the myriad of gardens and landscapes may be, all share one common thread: they provide a conduit of departure away from the pangs of the modern industrial grind.

From proud Victorian elements and Asian-inspired motifs to rich color scapes and tropical themes, Ocala’s bountiful warmth and rainfall make it a haven for any design that spews from the imagination. Where woody ornamentals thrive side-by-side with delicate annuals, vibrant perennials, tropical palms and majestic live oaks, Ocala provides a canvas with seemingly limitless options.

Even the most pedestrian landscape compositions can provide the charm necessary to satisfy one’s sustained thirst for solace and connection to nature. And to a point, every man becomes the caretaker of nature’s estate.

Here, though, we provide a pictorial glimpse into a few local gardens which go beyond the rudimentary aspects of landscape and showcase noteworthy designs that may even give the gardening tenderfoot relevant ideas. 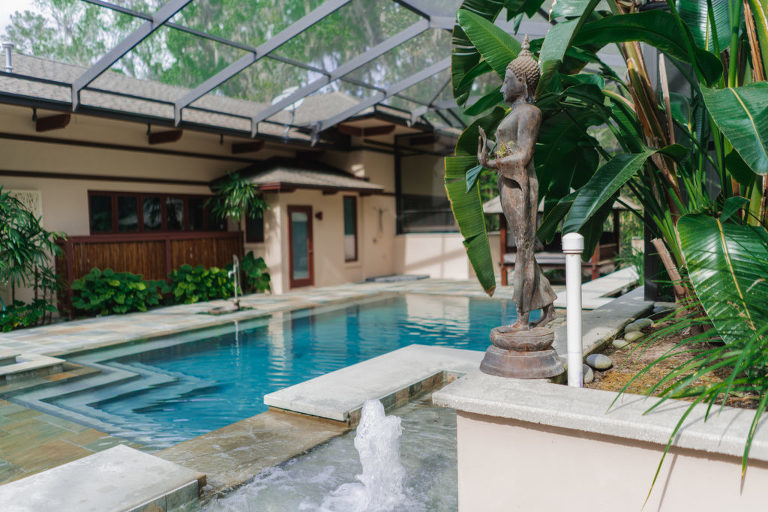 A Bit of Bali In Marion County

For Nora Colyn, a love and fascination with Asian culture and architecture, particularly of the Balinese variety, inspired a zen atmosphere in her back yard that commences upon the very entrance into the home.

Statuary crafted in Bali then shipped to her home in Ocala pepper the landscape without overwhelming it. From meditative Buddhas to protective dragons and Hindu goddesses, the statues hide amid tropical and local floras that take one to an Indonesian paradise without setting foot beyond the property.

“This is a sanctuary where I can forget about the outside world,” says Colyn, a native of South Africa who studied medicine stateside and earned her doctorate before settling in Ocala. “We’re 10 minutes from downtown, but you don’t know it when you’re here. It’s like an oasis—it’s very calm and peaceful.”

A pool enclosure that includes a Bali Hut along with black bamboo and other tropical flora inside can fool anyone into forgetting this is a man-made construct.

The house itself was inspired by Frank Lloyd Wright’s designs that seek to incorporate an “inside out, outside in” feel as described by Colyn, “so when you walk up the front door you can see through to the back yard and it all flows together.”

Past the philodendron and sandstone reliefs is yet another escape: a trail winding through the tall bamboo and leading to a scene reminiscent of a Balinese resort where only the sound of crashing waves is wanting.

The essence of Colyn’s paradise is that the garden starts before the front door of the home, continues through the house and into the back yard and even beyond. Whether inside our out, one feels safely confined in nature’s womb.

For R.J. Jenkins, maintaining the garden at his residence on Fort King Avenue is more than just a labor of love—he believes it to be his civic duty.

With his purchase of the James Taylor house just a few blocks from downtown, Jenkins’ love of horticulture and “working in the dirt” made it a match in heaven. Built in 1907, the Taylor house is among Ocala’s original homes of southern splendor and Jenkins believes it his obligation to maintain it as a source of community pride, and that starts with the garden.

“We feel very strongly that we’ve inherited a piece of Ocala’s history and we want to be responsible curators of that,” says Jenkins, who grew up in the Sarasota area, earned his Masters degree at Cambridge in England, but lived in the bustling confines of Manhattan right before moving to Ocala. “We feel very strongly about making this space accessible to people.”

Jenkins simply took over a garden that has evolved many times over since its inception which included muscadine grapes at one point and still maintains some of its pristine Victorian feel with its entry gate and trimmed hedges. The grapes are gone, but the trellises remain to stand proud amid the evolving elements.

“I’m inspired by English country gardening,” says Jenkins. “I spent a lot of time in England…Cambridge is famous for its gardens so I was very much influenced as a young man.

Jenkins notes the gaura which he leaves during the down seasons, allowing seedlings to take over once the warm weather commences. It may not be the typical annual re-planting of most gardeners, but Jenkins likes the somewhat chaotic nature that is a delicate order in itself.

Beneath the massive live oak trees rest tightly-manicured hedgerows along with a wide array of colorful material from the gaura and snap dragons to multiple varieties of azaleas, annuals, penta and other hardy material. Joining Jenkins as caretaker are his six chickens which freely roam the grounds.

“These girls (chickens) really rattle people in downtown Ocala; people think they’ve gotten loose,” Jenkins says. “They are at constant work in the yard: fertilizing the soils, eating ticks and other harmful insects and they’re aerating our soil all the time.

“Everyone thinks the chickens will tear the garden apart, but I’m delighted whenever I see them in my flowerbeds; I know they’re doing good things.”

In addition to being his own master gardener, Jenkins is also a bit of a philosopher when it comes to tending the grounds:

“This is church for me. In a world that feels difficult to control, it’s nice to get out here and do good in any small way I can. Voltaire tells us you have to weed your own garden. That’s his way of keeping (the world) out.” 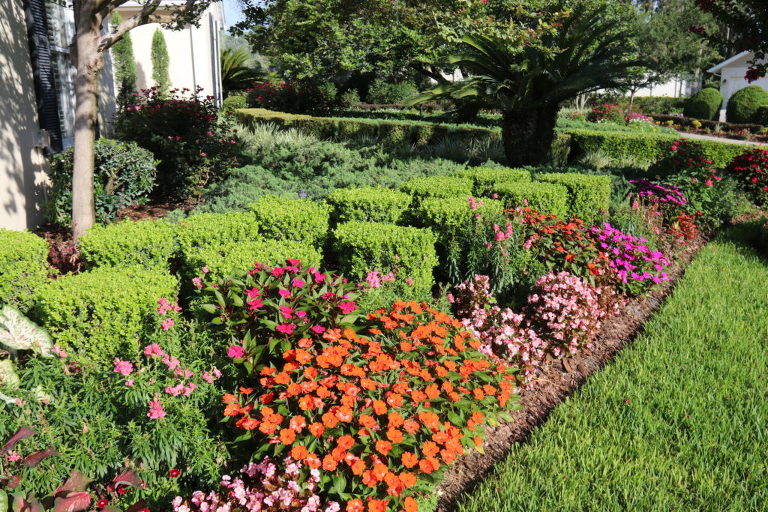 The property of Lt. Colonel Ed and Lois Johnson showcases much of what you would expect to see in modern landscape design while at the same time showcasing the living material that actually makes it a garden.

While featuring clean paths, brickwork and tight edges the Johnson property does not get obsessed with the man-made elements the way much modern design does. Here, the emphasis still remains on that which can breathe.

To find beautiful material, one need not traverse to exotic and distant locales – the indigenous product suffices quite well, thank you. The sheared boxwoods draw in the eye, only to be diverted by the proud King Sagos that welcome one to the stately domicile. But here, it is the brilliant hues that stop all comers in their tracks.

The Seminole pink and Tuscarora crape myrtle trees provide the central Florida flair matched by none for its summertime brilliance. Throw in the native hydrangeas and azaleas and the Johnsons provide the world with Marion County’s premier entry of its native flora.

Lois, a retired professional educator, and Ed, a retired Army combat aviator, have toured the formal gardens of America and the world and have nurtured one of their own right here in Ocala. A garden that blends modern sophistication and classic sculpting along with a subtle yet refined design that can please the eyes of elites and neophytes alike. 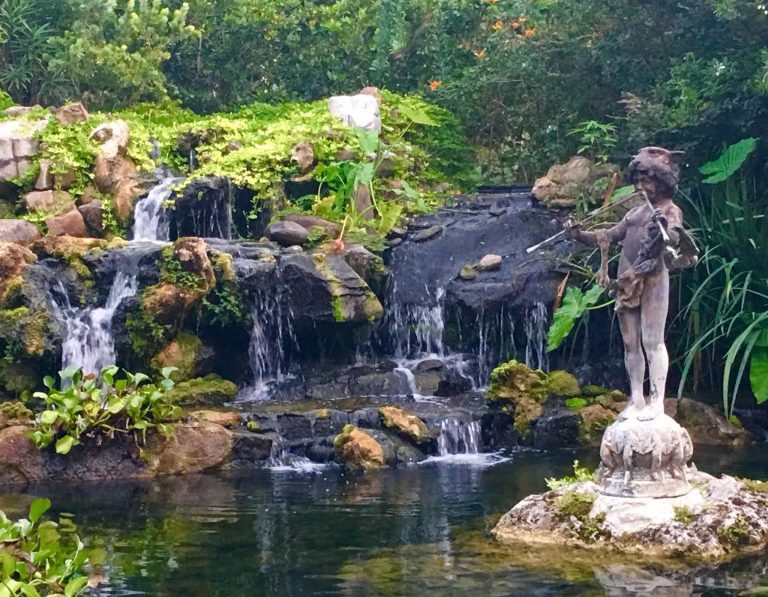 From boarding school in the Himalayan foothills to iconic Floridian developer, Kulbir Ghumman’s influences may be hard to peg, but the results of his inspiration lay bare for the world to enjoy. As a developer and builder, Ghumman’s company DECCA has built over 5,000 homes, golf and resort facilities along with the requisite amenities set off by “our trademark landscaping, waterfalls, ponds and fountains” — all aspects for others to enjoy. Finally, Ghumman has his own to enjoy and it may even exceed his own high standards.

In his blogpost, Ghumman says “. . . in 2011, after five years of planning and design, did we build my first ‘from scratch’ personal home on about two acres surrounded by centurion oaks that I had lived on in a renovated home since 1988. The house was demolished, the property was completely redesigned and landscaped and that is “the rest of the story.”

The rest of the story is a local treasure filled with koi ponds, rock formations, tropical landscape, vibrant colors, well-manicured lawns and pathways and statuary that renders itself subservient to its natural surroundings.

Ghumman has in a small manner recreated “the enchanted world that was not just an expression of my father’s passion for gardening, . . . but was also a remarkable engineering feat. . .”

As a boy growing up at the edge of the Thar desert in India, enjoying the “wheat millet and corn fields, orchards of exotic fruits . . . beautiful flowering annuals and extensive rose gardens” created an appreciation for gardening that Ghumman has finally fulfilled with his Ocala masterpiece.