A Match Made In Stella’s 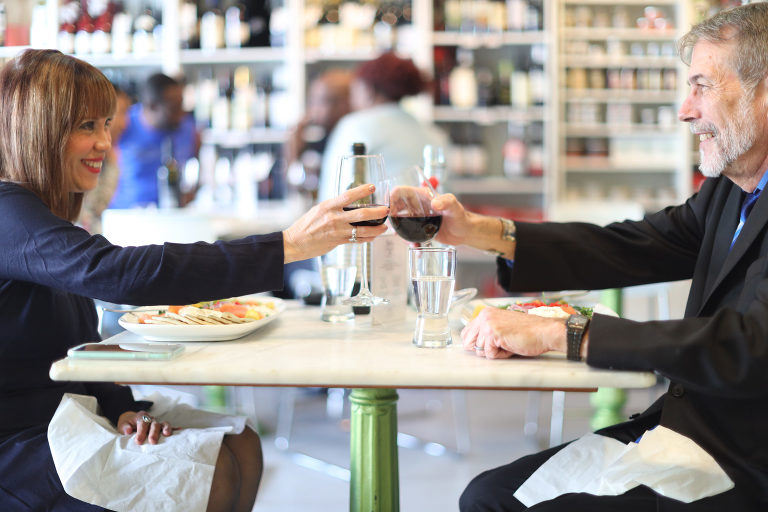 They say that love is sweeter the second time around. And for Larry and Carmen Shroads, that’s definitely the case. For both, it’s their second marriage. However, it’s the value they place on their relationship, on the importance of communication and listening, and on a tradition started on their first date that holds their marriage together as strongly as their vows.

The couple had agreed to meet at a place that would become an integral part of their lives, so much so, it has been part of their monthly routine. Carmen had been divorced for three years and Larry for much longer, prior to the initial encounter. “We met online,” said Carmen. “It was a blind date. We had seen pictures. I had gone to Stella’s [Modern Pantry] before with my daughter, and I knew some people at Stella’s. We used to go in the afternoon, every once in a while, and have some dessert or a glass of wine.”

The two agreed to meet on the afternoon of January 14, 2012, beginning a sojourn that evolved from its nascent stages, flourished into love and understanding and an even deeper commitment, all from that very first meeting where the stars aligned.

The Shroads first face-to-face meeting became the start of a journey and a bonding process that has become stronger with each step taken. The two would eventually exchange wedding vows on June 29, 2015. But that first time at Stella’s continues to resonate in the very fiber of the Shroads’ marriage, interwoven into a relationship that is as beautiful as the most elegant of tapestries. They became lost in the moment during that first meeting.

“We were certainly happy to see each other,” said Larry, regarding the couple’s first date. “We were talking and were there for quite a while. I guess we met about 5:30 p.m. or somewhere roughly around there. So, we were looking around, we had been in there a long time, and we noticed we were the only people there. We noticed even a few chairs had been put up on the table.”

“Jeremy was mopping the floor a little bit, and I looked down at my watch, and it was almost 10 o’clock, and I’m like, ‘Oh my gosh! Carmen, I think they’ve closed the place. We’re the only people here.’ So, I went back and paid for dinner, and I sheepishly asked Jeremy, ‘My gosh, when did you guys close? I think we’re the only ones here.’ He said, ‘Well, we closed at 7.’ It was 10 o’clock. ‘We weren’t going to break you guys up and make you guys leave.’”

The Shroads have been embraced by the staff at Stella’s, who have shared their stories with the Shroads, and it’s the staff’s warmth and consideration that keeps the Shroads coming back month after month to celebrate something far greater than themselves as individuals.

“It was incredibly special; they didn’t want to interrupt us,” said Larry. “We were talking and enjoying, getting to know one another. We’ve been to Stella’s every month since then, since 2012. In January, it will be 96 months in a row.”

It’s Stella’s ambiance and its staff’s personal touch that creates a cozy atmosphere, where you feel you’re among a close-knit group, and there’s a real connection, said Carmen.

“Stella’s was meant to be a pantry, they added a few tables, and it became what it is now,” said Carmen. “They have great dessert and great food. It’s just the fact that it’s a small venue. The people that go to Stella’s aren’t in a hurry. No one is there demanding something this way or that way. The customers are known by the people who work there. We have seen so many servers come and go. They all have wonderful personalities. It’s a special place for us because we’ve met so many people.”

But there’s one person’s presence who has made a significant difference during their monthly return engagements. Albert, who co-owns Stella’s Modern Pantry and is also the chef, is family, said Larry.

“He comes to our house, and I’m flattered because the chef loves our food,” said Carmen, who is a school teacher. “I’m Puerto Rican, so I know a lot of Puerto Rican recipes. I grew up with the best people that taught me so much. He loves the food.”

The couple has thousands of photos from having had nearly 100 dates at the restaurant, progressively capturing the memories and romance that have played a critical role in their connection. Carmen and Larry get dressed up for each date at Stella’s in matching colors, wearing their very best, with Carmen getting her hair done and Larry his beard. But one thing has remained constant throughout their eight-year relationship.

“Through thick and thin, we’ve had lots of laughter and tears,” said Carmen. “We’ve lost pets that we adore, family members that have passed, but we always make sure that we go to Stella’s. It doesn’t matter. We have a part-time home in North Carolina and we make sure to come to Stella’s during the summer. I say ‘It’s time to go to Stella’s.’”

However, the streak appeared to be in jeopardy in 2018, when Carmen became ill. In spite of adversity creating what would seem to be an insurmountable obstacle, Carmen rallied, recovering in time to make their monthly engagement. “The photo shows a very frail me,” said Carmen. “My husband held me, and we took the picture.”

The couple never envisioned their first date would lead to a life of love, listening, and lifting one another’s spirits.

“I didn’t know it was going to be this way but after talking with him, looking into his eyes, our conversation and how much we had in common… Although we’re different in so many ways, but in so many ways, we’re alike,” said Carmen.

Those commonalities and similarities provided a foundation during that initial encounter. 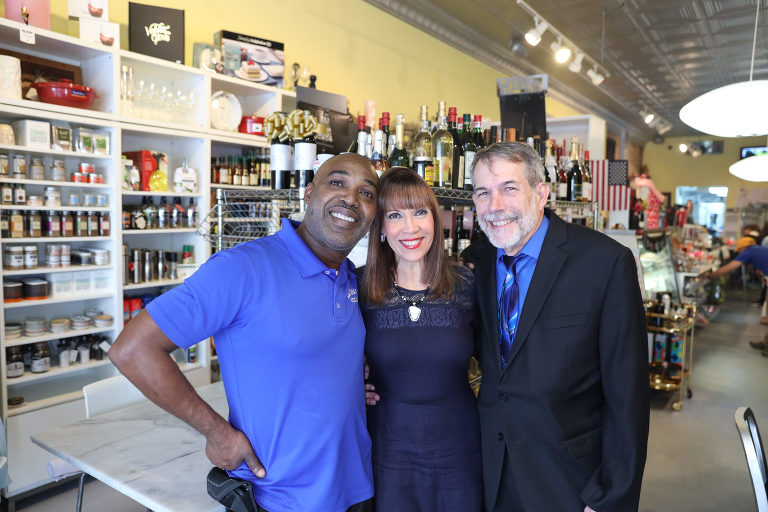 And to this day, the romance, commonalities, and their irrepressible love for one another keeps the relationship healthy and flourishing, making each other a priority, finding time for one another.

“We have a candlelight dinner every night, even if we’re having leftovers. … We dim the lights, light the candles, put on some soft music and talk,” said Carmen. “He’s my best friend. He’s my best fan. He always listens and has the best advice. When he doesn’t have advice, he always offers support, and holds my hand,” she said, giggling.

The tradition of having a date night resonates powerfully with the couple, said Larry.

“It’s very important for us to do that,” said Larry. “I was in a bicycle accident, shattered my clavicle, and that didn’t stop us from going to Stella’s that month. It’s important to have those things, and we look forward to it, where we have it on the calendar with the day that we’re going to be at Stella’s. It’s something that we think about as the day’s approaching.”

Carmen is the couple’s planner and always makes sure there is time in their schedules to go to Stella’s. They try not to let more than five weeks go by before they return, she said.

The couple has served as an inspiration to others through their loyalty and commitment, according to Albert, Stella’s co-owner and chef, said Larry.

Albert will sit with the couple, acknowledging that Carmen and Larry’s love symbolizes the importance of taking the time to be with one another and how the Shroads’ relationship motivates others to start their own tradition of having a date night, said Carmen.

“They need to be each other’s best friend. … You have to be able to tell that person everything, no matter what,” said Carmen. “And also become a good listener. My husband is a good listener. He’s the best listener ever. He listens attentively.”

The deep mutual respect the couple has for one another is palpable, with Carmen referring to Larry as a gentleman and Larry to Carmen as a lady. But one thing is for certain, the Shroads will be a presence at Stella’s for years to come.

« On The Menu: Latin American CaféIsn’t it Romantic? »