We are the World

By Robin Fannon of RSVP Robin

How Ocala’s culturally diverse community is celebrating this holiday season

Ocala truly represents every typical small town in America. A melting pot of cultures and traditions that create this gorgeous soup we call the United States. Diverse religious beliefs, customs and rituals, melded together with the American way of life, make us the beautiful community that we are. We gathered together some Ocala residents that made their way here, that hail from faraway places, to share how their families celebrate the holidays, keeping their traditions from their homelands close to their hearts. Almost everyone said that they typically attend a Christmas Eve midnight church service, but one tradition that we all have in common is the food-centric nature of the holiday season, with ample drink (sweet treats being everyone’s most favorite). 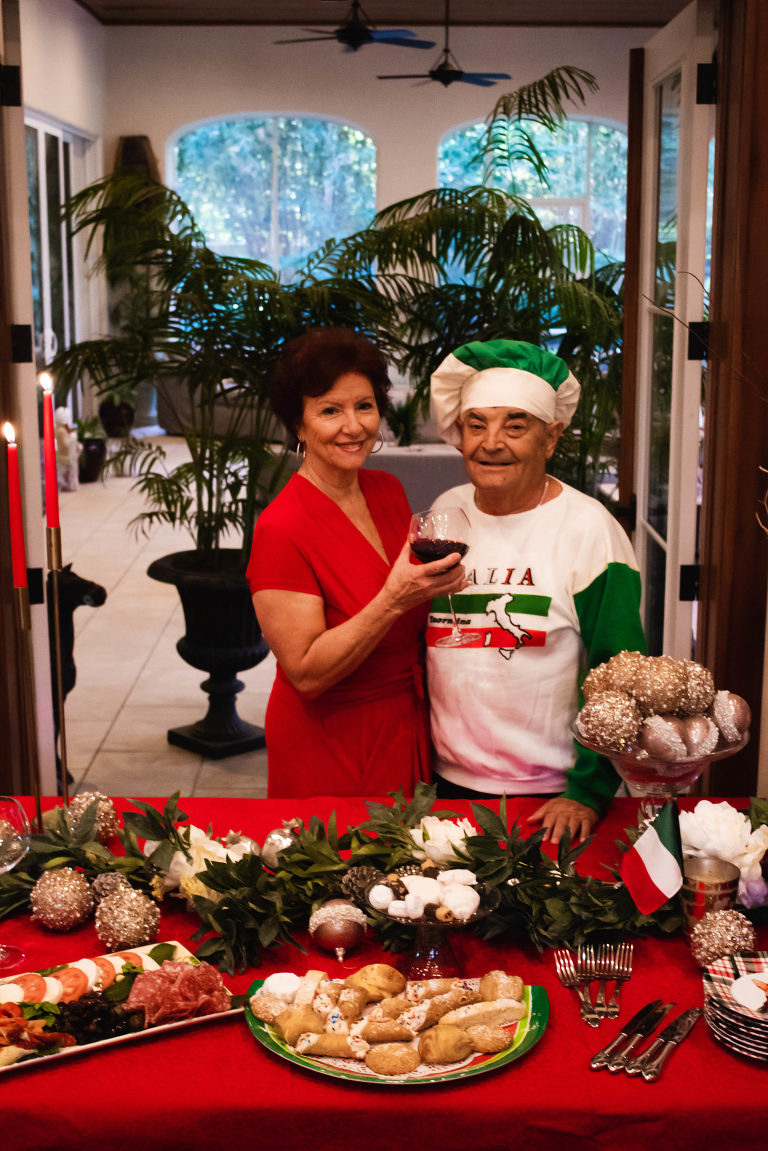 Dominick Ragosta comes from Naples and his wife, Lena, from Sicily, but they actually met as teenagers in New York at a relative’s wedding. She, a bridesmaid and he, the best man. Lena’s father was strict, so their courtship was done under strict supervision! They eventually married and had three children, Dennis, Anna and Nancy. Holidays in the Ragosta household are a family affair featuring lots of (you guessed it) pasta!

Christmas Eve features the Italian tradition of La Vigilia (The Vigil) with a meal typically consisting of seven types of seafood dishes a.k.a “The Feast of the Seven Fishes.” Lena is famous for her blue-crab sauce, which is ladled over pasta. On Christmas day, gifts are exchanged as a big pot of red sauce simmers on the stove. The sauce (or gravy) is served over pasta and eaten family style. Italian cookies, ricotta cheesecake and pastiera (wheat pie) typically follow the meal. 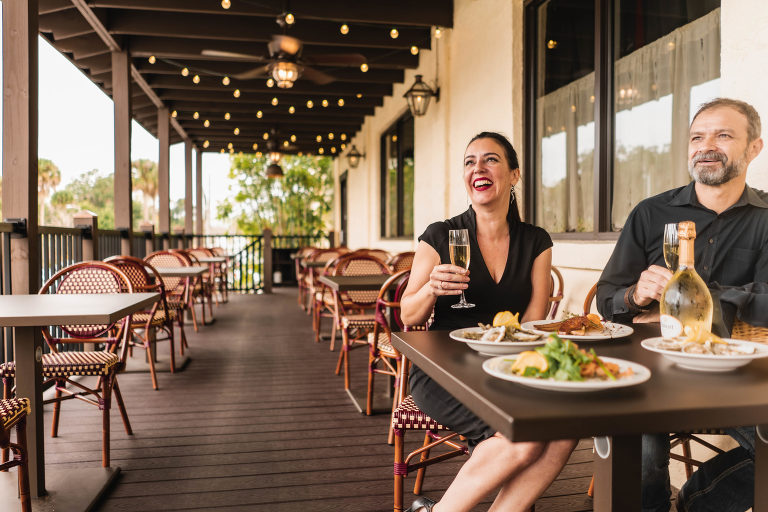 Elodie and Patrice Perron are well known in the community for their incredibly French and incredibly popular downtown restaurant “La Cuisine.” Christmas in France is a gastronomical feast of elegant meals, fine champagne, and delectable desserts. The festivities begin on Christmas Eve with a family gathering, which typically begins at 8pm. Dressed in their finest, they begin with an aperitif (Champagne…lots of Champagne) and amuse-bouche (a cocktail and hors d’oeuvres to us).

Dinner is a sit-down affair with a variety of classic French appetizers: oysters, smoked salmon, foie gras, all served with the appropriate accompaniments and rustic country breads. Dinner features meat such as game or venison in a Burgundy sauce with potatoes. Now is when the amazing cheese course and salad come in. La grande finale is a traditional Buche de Noel followed by midnight church services. Gifts are exchanged on Christmas morning and once again cooking begins for the evening meal. This meal features much of the same food, but perhaps the entrée will be a fish dish with rice and petits fours. Oh yes, and encore du champagne! 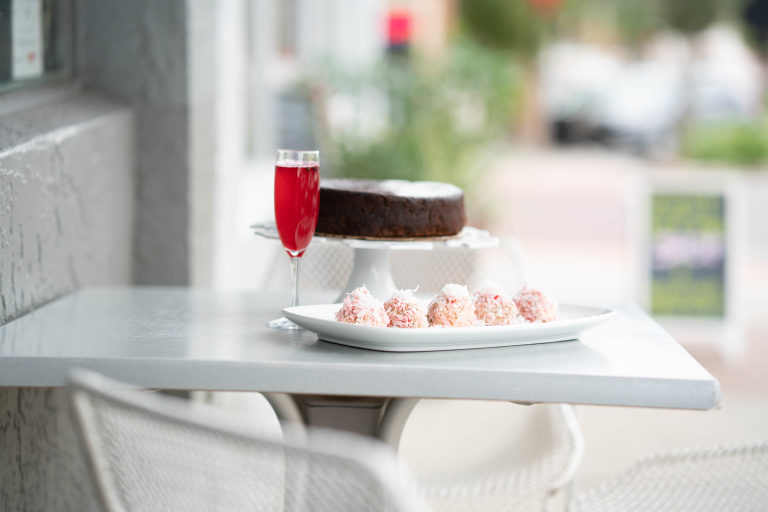 Coming soon to our bustling downtown is a new Jamaican restaurant called “Irie Eats.” I met up with owners and chefs Henri Williams, Pete McNeish, Gary Grey and Sophia Rowe while they were visiting their fellow restaurateur and expat Albert Barrett of Stella’s Modern Pantry. Their description of the holiday festivities on the island can be summed up in one wor—party! An all-night street party begins on Christmas Eve on famed Grand Market Street.

Local shop owners stay open; everyone wears their finest clothing and heads outdoors to eat street food, drink, and dance to live music everywhere. Christmas morning is for gift exchanges, resting and then cooking and enjoying family dinner. The dinner features many of their indigenous dishes: jerk chicken, rice and peas, oxtail and curried goat. Most importantly, the dinner ends with the very rich and alcohol-laden rum cake that the island is famous for. The party continues the day after Christmas when Jamaicans celebrate Boxing Day. 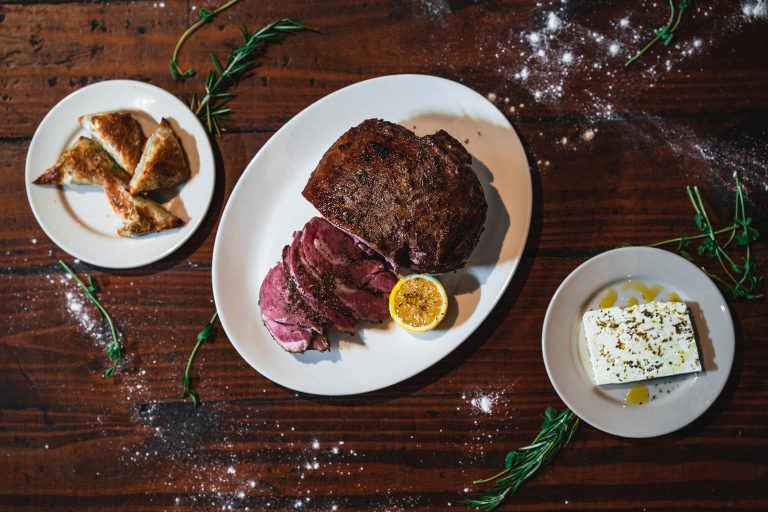 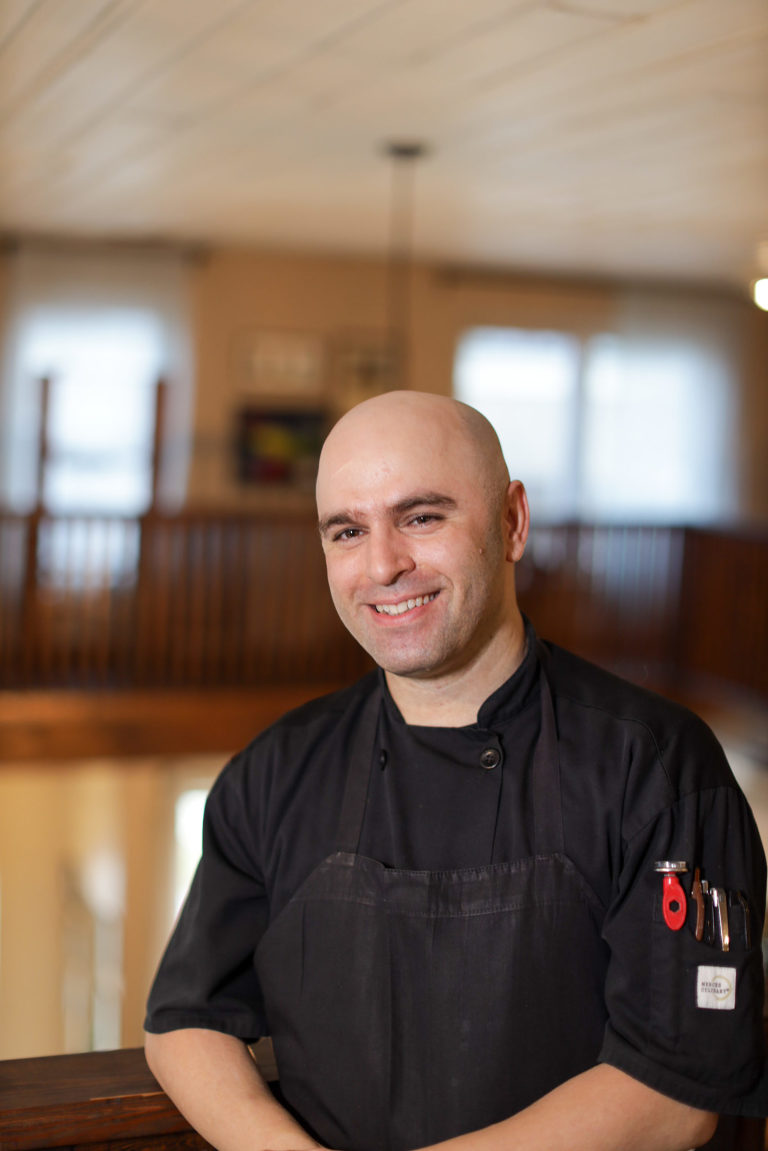 Chef Dmitri Pomakis comes from Thessaloniki, Greece, which is renowned for its rich cultural life, festivals, and events. Christmas in the Pomakis household is very similar to our own. A decorated Christmas tree, gifts, and midnight church services. Christmas day is centered on the meal: roast lamb and potatoes, spirits such as Retsina wine, Ouzo and Tsipouro. Desserts traditionally eaten are melomakarona (honey cookies), baklava and kataïfi (both of these are rich, delectable sweets made from phyllo dough).

Traditional on New Year’s Day is St. Basil’s Cake in which a coin is hidden in the cake to bring good luck to the recipients. It is also customary to smash pomegranates on the first day of the year. It is Greek folklore that pomegranates symbolize strength, eternity, and good fortune. Dmitri and his family do in fact practice the custom of breaking plates, which is an expression of joy. This calls for a loud OPA! 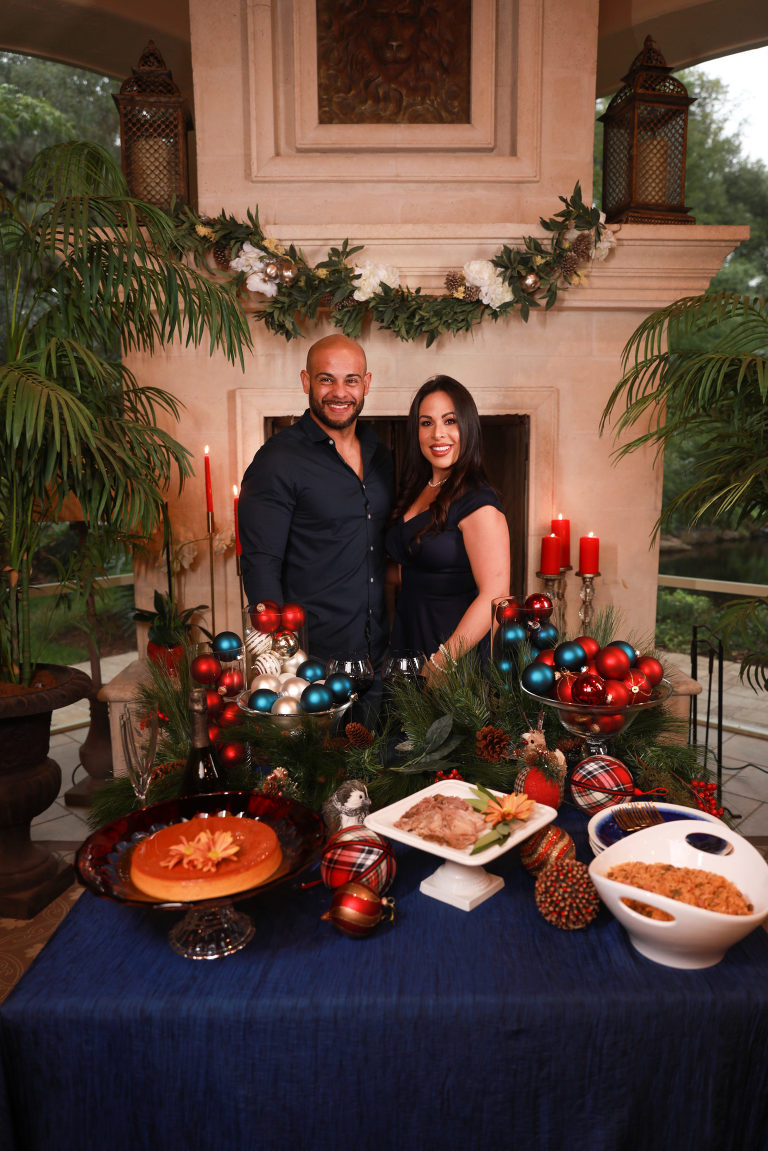 Martha and Miguel “Dr. Q” Quintana have busy lives, owning and operating Alpha Rehabilitation in Ocala and raising their two young boys Miguel, 14, and Malachi, 12. Their Christmas celebrations begin on Christmas Eve, with a traditional Noche Buena and culminate with Three Kings Day or Epiphany in January. Noche Buena’s meal consists of arroz con gandules (Puerto Rican rice with pigeon peas), lechon (roast pork) and of course the delicious and decadent flan. The Quintana’s have a deep-seated faith. Martha sums up one of their traditions: “When I think about a tradition in our family, the first thing that comes to mind is La Bendicion. La Bendicion is a major part of the Latino culture. Passed down from generations, it plays an important role among Latino families because it is how we greet and say goodbye to the matriarchs and patriarchs in our families. It is a way to show reverence for our older family members. La Bendicion is asked of a mother, father, aunt, uncle and grandparents. It is a blessing that grants you a good day, a positive outcome, and a word of protection. In English, la bendicion is translated to “the blessing.” 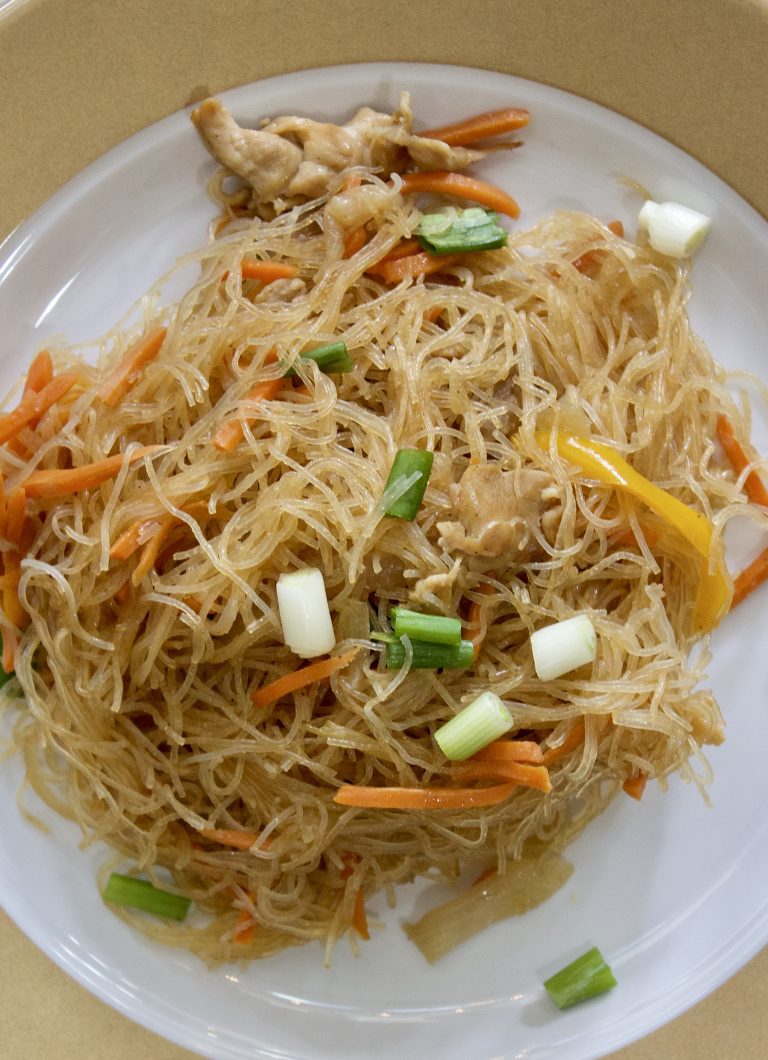 Sandra King came to the United States with her two children in 1993 (pictured here with her son Daniel) to join her late husband, who was an American veteran. They chose to live in Florida because the tropical climate resembled her homeland, the Philippines. Sandra is a devout Catholic, actively involved in two local churches. She serves as an acolyte (minister of Holy Communion) at both Blessed Trinity in Ocala and St. Theresa in Belleview. Every year from the 16th to the 24th of December, Sandra practices Simbang Gabi, which is a nine-day series of masses, typically held at dawn, that is a novena to the Blessed Mother.

Active in the Filipino American community in Ocala, Sandra is an amazing cook and takes great pride in sharing her native dishes with her family and friends. Here she shares two of the dishes commonly served at celebrations; lumpia: a Filipino eggroll, and pancit, a noodle dish that represents long life and good health.