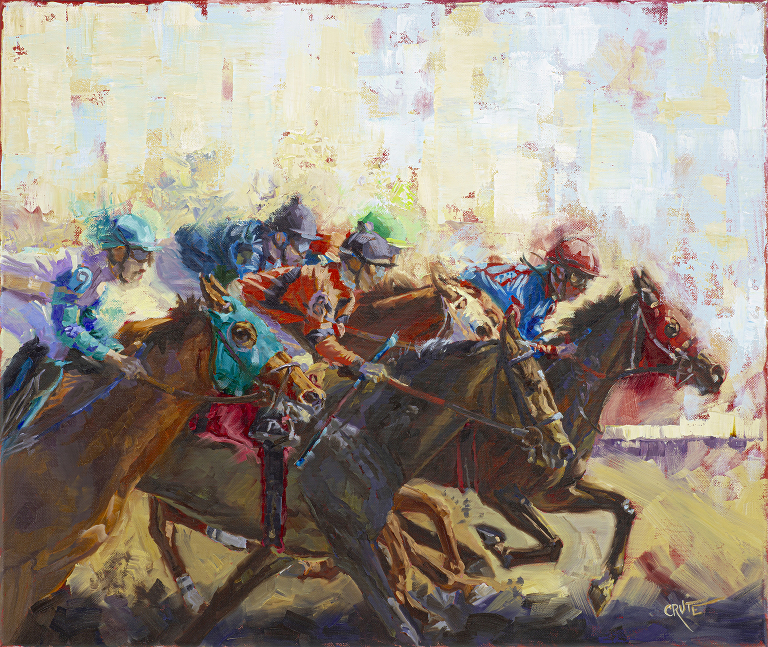 An artist whose work evokes a passion and spirit that’s palpable and still resonates throughout the community, even though she’s been gone from Ocala for nearly a decade.

Sharon Crute’s artwork is timeless and can still be found throughout Marion County. It’s her life and professional experience at the operational level that creates a dynamic, one that captures the spirit and vitality of the sport of Thoroughbred racing, helping one experience what they might feel if they were involved with the process.

Two of her pieces, the painted fiberglass horses from the Horse Fever project, can be found in Marion County. Champ stands proudly in front of the headquarters of the Florida Thoroughbred Breeders’ and Owners’ Association, and World Champ resides on the city’s square.

This past year has found Crute expanding her horizons, undergoing a comprehensive educational course. The course revealed a different side of the art world, one that very few artists have the privilege to undertake, and gave Crute access to a series of resources that will benefit her markedly. The Clark Hulings Fund for Visual Artists has provided Crute with greater insight.

“He was an extremely well-known American painter, a realistic painter,” said Crute. “He enjoyed a lot of financial success, and his daughter Elizabeth set up the fellowship to try to teach artists the business aspect, because her father had done so well financially and was such a sharp and respected businessman. She wants to help artists experience the same kind of thing.”

Crute applied for the fellowship on a whim and propitiously was one of 16 artists selected from a pool of 113 applicants.

The fellowship has been an intense learning process, one that has been extremely demanding, said Crute.

“They don’t want any artists whining or any of that stuff,” said Crute. “They call us out on a lot of things. But they’ve taught us so much. Right now, I’m trying to figure out everything without being overwhelmed.” 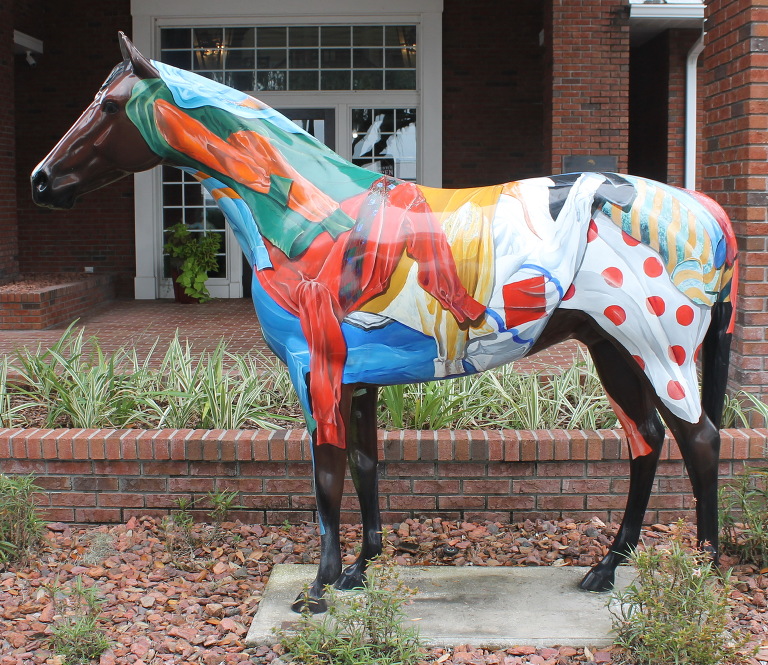 The artist has learned about career blueprinting, marketing and sales strategy, creating a brand, finances, and technology, but the cornerstone is that as a fellow, Crute must create a pivotal project, something that will serve as a mechanism to help accelerate her career.

“It will propel you, so people will see what you’re doing and that you’re doing something fantastic that’s really different,” said Crute. “My pivotal project is going to be a multimedia interactive installation. It’s big. It’s ambitious. I’m going to need some sponsorship, some funding. I haven’t embarked on that because I’ve been working on commissions for Christmas. I’m anxious to get going, but I have to keep the money flowing in.”

The idea for the pivotal project has been more than a decade in the making. The concept first came to Crute in 2007, while she was still in Ocala. 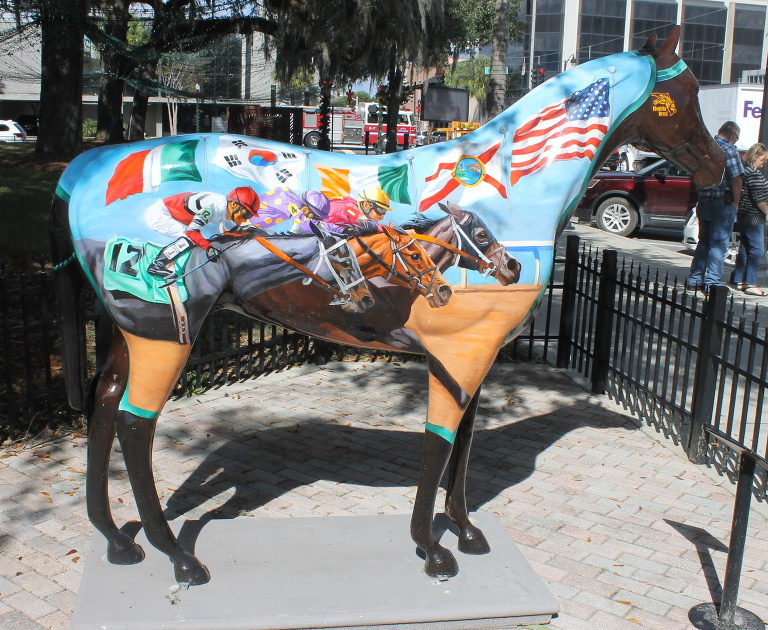 “I went to the then director of the Appleton Museum, John Lofgren, and I showed him my concept sketch of what I had, and I said, ‘John, I need 73 feet.’ He looked at it, and kind of pondered it for a moment. He said, ‘Okay, I can give you 73 feet.’ Back then, they would have a contemporary art exhibit every year, and it was very compelling. It was beautiful, modern and very different from painting and sculpture. A lot of it was installations.”

However, the timing didn’t seem to be right for the project as the recession hit, and Lofgren took a position with another museum.

“I had to get real busy monetizing my career because things were tough in Ocala, and I stuck it out as long as I could,” said Crute. “It was time to make a change because I wanted to do other things. I had been wooing NYRA [the New York Racing Association] for years about trying to get in as an artist vendor, and I had this woman, Kimberly Justice, who was the head of marketing at the time. She took notice of me, became a champion for me, and I got in. I think 2010 was my first year there. At that point, it just made sense to move up to Saratoga.”

The pivotal project is both a visual and sensory experience, said Crute. The installation will be composed of 16 paintings demonstrating the progression of a horse during an intense workout, starting with a small canvas, 2 feet by 3 feet, progressing to a big canvas in the middle, 8 feet by 6 feet, as if the viewer was standing on the turn and the horse is right in front of the observer, and then the canvases would decrease in size, giving it the appearance that the horse is going away from the viewer. The project  will provide the casual racing fan and curious onlooker the opportunity to get a unique perspective about the sport of Thoroughbred racing they normally wouldn’t be able to access. Crute hopes that the artwork will encourage a dialog and create a deeper understanding about the sport.

“I’m very excited about this pivotal project, but now what I’ve done is added a lot more components to it,” said Crute. “Now I want to do the same thing, but I’m adding audio, lights, and a platform, where the viewer is going to have the opportunity to stand, and you’ll feel the vibration underneath. 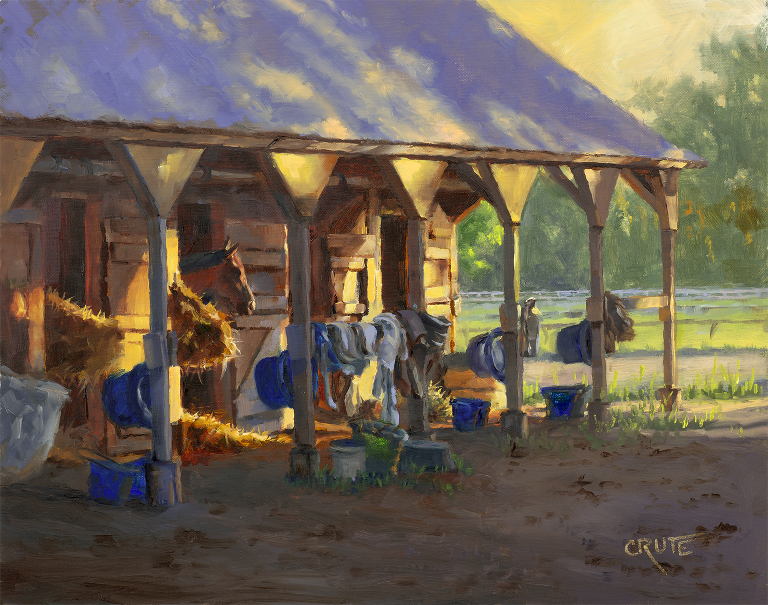 “It’s a huge departure from painting, and I’ve been a painter forever. This is something really great because I’m going to still be able to combine fine art with stepping out toward this technology and embracing it. It’s funny, when you start showing this to people, I have approached some people about it, they come up with some really great ideas and some suggestions, so it starts the ball rolling for you…it’s pretty exciting to me. It’s really different.”

Crute’s deep knowledge of the sport and her passion for Thoroughbred racing is perceptible. Her artwork has captured the nation’s imagination, and it’s her understanding of the equine form and its action that makes her paintings come out of the canvas, creating an experience that resonates deeply with every observer of her work.

“I’ve always been an equine artist, which is so genre specific, but I know that my heart is in horse racing,” said Crute. “And coming to that realization has really honed my focus. Being married to a horse trainer and seeing what he goes through and what his peers go through.”

However, one component of the pivotal project Crute would like to emphasize is that she’s a horsewoman, that she’s worked in the business, rubbed and galloped horses, was a racing official in California, and has a deep understanding of the equine athlete and the industry.

For the past nine years, Crute has been a full-time vendor at Saratoga Race Course in Saratoga Springs, New York, a prestigious place for an artist to showcase their work. There’s a 10 year wait for artists to get in, said Crute. However, as she continues to evolve as an artist, a different series of challenges may be on the way.

“The dynamics have changed a lot at the track,” said Crute. “I’m not sure where I am in my career, if I want to continue doing that because it’s very demanding. The meet has increased from six weeks to seven. So, it’s almost the entire summer. And I’m wondering at this point, with what I’ve been through with the fellowship, if it’s necessary for me to do this.”

However, Crute has a deep connection with Saratoga Race Course, the main track and the Oklahoma Training Track, and will continue to be a fixture, should she decide to make some adjustments with her career going forward.

“I love to plein air paint in the morning in the barn area,” said Crute. “I would transition from being a full-time vendor in a booth to getting out there at 5 a.m. or 5:30 a.m. every morning, setting up and painting, and that’s very productive and people like to see the process. They don’t get to see the artists at work. I’m very comfortable talking to them as I’m painting. And that’s something I’m considering. I’m not saying I won’t do the vendorship again, but I’m very open-minded about it and will take advantage of any opportunities that come my way.”

« Join the ClubCommit to the Change »