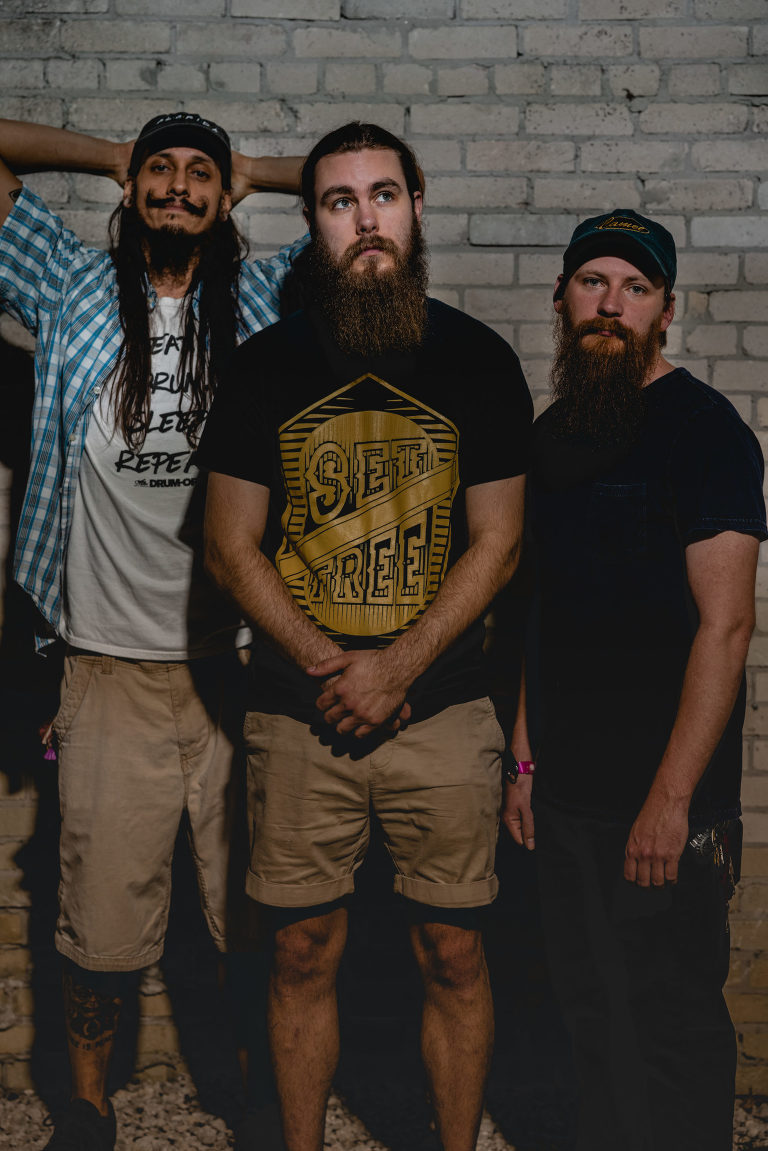 Words and Photos by Joshua Jacobs

Tell me about how you started?

Andrew: It started out as an alias for me to play acoustic shows under. I didn’t want my full name on the bill so I went under “Baseline” or Andrew from Baseline. I had hopes of having a full band one day, but until then, I just liked the name and ran with it.  There was some talks of friends who wanted to play in the band but it wasn’t until the month of my 23rd birthday that I found a good friend I’d known for a while who was also looking for a band to play in.  I asked Jason Feagin if he wanted to play a Blink 182 cover set for my 23rd birthday, and after our first practice, it just felt like the right fit.  I remember him bringing over a couple IPAs for us to have during our practice and saying, “I think this is the start of a beautiful friendship.”  And it definitely has been over the last five years, being in a band with Jason. After a couple lineup changes, we solidified our group with the final addition of Zach Hess (drummer) joining the band about three years ago. This is the dynamic that is Baseline.

How long have you been involved in the Ocala Music Scene?

Andrew: We started with playing acoustic sets in 2014. With the addition of new members, we started playing full sets the year after.  The band had a couple of lineup changes but has been continuing to perform as a full band since 2015.

Jason: For me, I was just a kid who wanted a guitar.  After I learned to play, that’s all I wanted to do.

Andrew: When I was 14, I broke my left arm jumping off a trampoline. While I was in a cast, I watched a little movie called “School of Rock,” and it was then I realized I wanted to play guitar. A year later, I went to see Relient K at Rock the Universe for the first time. It was then, in a full moment of clarity, that I knew I wanted to write songs and create my own music.

What or Who are some of your biggest  Musical influences?

Andrew: When I first started writing songs, Relient K,  MxPx, and Anberlin were big staples in my life, so a lot of our earlier songs sound like the work of Matt Thiessen. Things definitely changed when I found out about The Cure. Robert Smith has a big influence in my life that I am so grateful for. Lately it’s a lot of stuff.  The more I discover, the more I find things I love and want to put to use in our music.  I’d say Fugazi and Ceremony have been pretty influential to the band as whole.

Zach: The faster, the heavier, the better! Metal music was what definitely sparked my fire to play music. As I grew, I learned to love all forms of music and fell deeply in love with jazz and Latin grooves and have been broadening my musical horizons ever since.

Jason: I grew up on punk rock and metal. Lately I’ve been most influenced by bands such as PUP and The Menzingers. 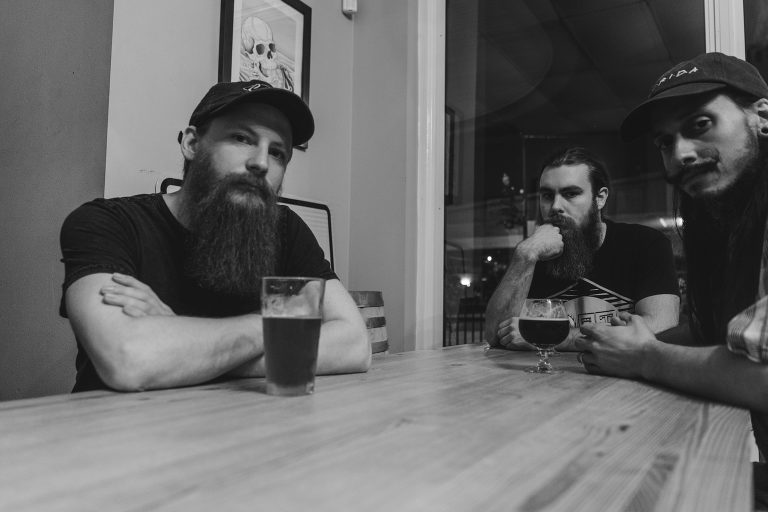 Baseline is a great name! How did you come up with it?

Andrew: Back in 2013, after many of humorous and joking attempts at band names, one of the underdog names actually stuck. After hitting golf balls on the “Baseline” driving range and passing the local “Baseline” discount beverage store, a friend blurted out “You should name your band ‘Baseline,’” purely as a joke. Little did we know it would stick.

How long have you been performing as a band?

Andrew: As full band? Five years. We’ve had some lineup changes, one of them being my little brother, Cole, who filled in on drums for a couple years before Zach joined. It’s been two full years of Jason, Zach, and myself as Baseline.

Take us through the songwriting process when in comes to the band. Is it just one or all of you contributing to the lyrics?

Andrew: It might change in the future, which I hope it does, but usually I come to the band with a rough idea of a song or a mostly complete piece, with lyrics and all. From that, we all toy around with the progression of the song musically, both Zach and Jason adding their own touch to it, making it a true collective piece.

Being in the music scene here in Ocala, what would you like to see in the future that could improve the state of the scene?

Andrew: I think a lot of times, I hear folks and bands complain about people not caring enough about the music scene. Not coming out to support more or just coming out to see the bigger bands. And that may be true, but I don’t think people are impressed enough with what the scene has to offer.  There’s not enough bands taking bigger risks with their art or trying something different, too much of the same old, same old sound. If we took chances, then maybe we could start a chain reaction of creating something new and exciting. Something people can’t get enough of. And also, having a solid venue to play at would be nice too. 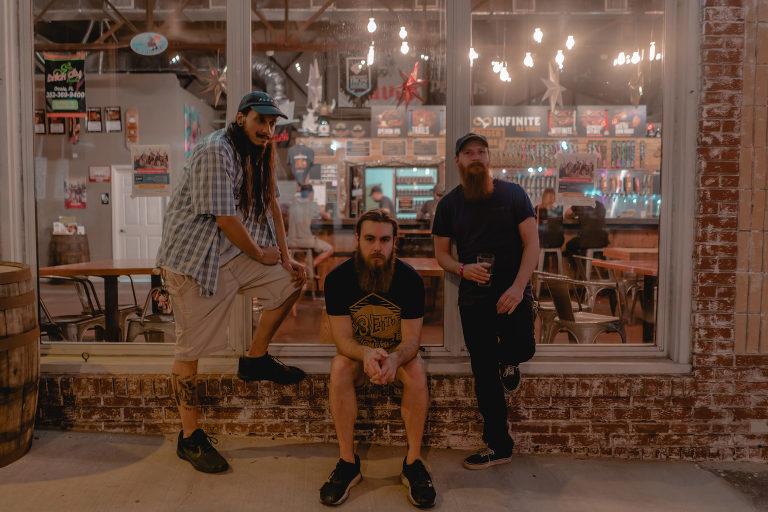 What has been the most memorable moment you’ve experienced while performing?

Andrew: For us, playing a house show block party and having the fire dancers walk through us during the middle of our set, while the homeowner hijacked the mic and was screaming the lyrics to Green Day’s “Brainstew.”

What does the future of Baseline look like? Any shows or more EPs coming soon?

Andrew: We have a pretty big show on January 19th. We’re the local support for the 15th anniversary tour of Hawthorne Heights’ “Silence in Black and White” as well as one of our favorite albums “The Weeks End” by Emery who is also on tour with Hawthorne. Like I said, it’s going to be huge, at least for us.

As far as new music goes, we have a five song album already written and ready to go. Hoping to get back to the studio and knock them out, so we can release it before spring of next year.  The future feels pretty bright for us. Just wanting to write and release more music, each album being better than the last one. All the while wanting what we do to make some difference in the local scene or our music making a difference in someone’s life. If not, at least we have fun doing what we do: drinking beer, playing rock and roll, and hanging out with our friends.

To listen to their latest EP “Discount Beverage,” visit Baselineocala.bandcamp.com and be sure to follow them on all social media platforms at @baselineocala.