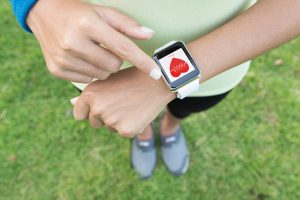 Every year electronics aficionados await Apple’s special events where they introduce new products. During last year’s September 12th event, held in the Steve Jobs Theater, Apple announced three new complications (snippets of data that appear on the face of an Apple smartwatch, including medical monitoring information) for the Apple Watch 4 that is furthering the company’s foray into the medical device world. Those complications are: fall detection, an atrial fibrillation (AFib) detection app, and an electrocardiogram (ECG) app. Of particular interest are the AFib and ECG apps, since they required FDA clearance to classify the watch as a class II medical device. This evolves the watch’s fitness monitoring capability to healthcare monitoring. Since then there has been discussion of the usefulness of the product. The technology comes standard in every Apple Watch 4, but who will need it and is it accurate?

First let’s focus on is the marketing behind the Apple Watch 4. During the September 12 keynote Apple COO Jeff Williams took the stage and touted the watch’s new features and benefits.

Guardian of the Galaxy

The optical sensor in the back, which traditionally computed calories burned and resting heart rate, has been repurposed for its guardian role. Two new features were added. Low heart rate notification is sent and the heart rhythm is screened in the background with notification sent if atrial fibrillation (AFib) is detected.

An ECG heart feature was added by integrating two electrodes, one on the watch back and one on the digital crown. This was touted as the first ECG product offered over-the-counter, directly to consumers. It can detect a normal rhythm (sinus rhythm) or irregular rhythm (AFib). The ECG app analyzes the data and creates a PDF that can be shared with a physician. During the presentation, the president of the American Heart Association Dr. Ivor J. Benjamin was brought on stage. “The ability to access health data on an on-demand electrocardiogram, or ECG, is game changing.” he stated.

Both the ECG app and the irregular heart rhythm alert received FDA De Novo clearance, which was explained as the “first of its kind.”

What the watch isn’t

Before you spend some hard-earned cash, let’s examine some of the claims. The endorsement by the president of the American Heart Association and the FDA clearance may sound like a deal-maker, but what exactly is FDA De Novo clearance and what does the letter from the FDA actually say?

A De Novo novel device can be described as a new device that has no equivalents in the FDA database. Apple called the Watch 4 “the first ECG product offered over-the-counter directly to consumers” and referred to the FDA clearance as “first of its kind.” There is actually a competitor – AliveCor – that was FDA cleared in 2014 for heart rate monitoring and is available OTC to consumers. A key difference is the AliveCor product is offered as an accessory to an Apple or Android device with external electrodes while the Watch 4 has the sensors built-in.

Dr. Ivor Benjamin, called an on-demand ECG wearable device “game changing”. The reality is that there has been criticism that the single lead data obtained by the Series 4 watch may lead to false positives and unnecessary trips to the doctor. Being a class II medical device, means that special controls are required to lower risk to consumers, including labeling.

According to the FDA clearance letter for the ECG app, the data displayed from the product is intended for informational use only and is not intended to replace traditional methods of diagnosis or treatment.

If a person is seriously concerned about their heart health, they should absolutely see their local cardiologist. A proper electrocardiogram uses 10 electrodes to obtain 12 leads of data. The data obtained is more extensive than Apple’s one lead, two electrode test and a qualified physician will make better decisions than a layman. With that said the Apple Watch is still the highest selling watch in the world. The new features are making breakthroughs in functional wearable technology.

What is an atrial fibrillation (AFib)?

The heart beats irregularly. The upper chambers of the heart are out of sync with the lower chambers.

What is an ECG?

An ECG is an electrocardiogram. It is a test that measures the electrical activity of the heart. A standard ECG uses ten electrodes to measure twelve leads. A lead is the graphical representation of the measurements. The simplest test, a one lead test, is derived by taking the measurements between two electrodes.

How does the Apple Watch 4 heart monitoring work?

Optical Sensors (PPG): Ever since the first-generation Apple Watch was released in 2014, the products have had optical heart rate sensors in the watch back. This technology is known as a photoplethysmogram (PPG). It’s simple, low cost, and non-invasive. The way it works is it illuminates the skin with a light emitting diode and then measures either the amount of light reflected or absorbed with a photodiode. The photodiode converts light into an electric current which can be measured. Paired with the AFib app the optical heart sensor can detect an irregular heartbeat.

Electrodes (ECG): The Apple Watch 4 has two sensors added. There is a back electrode and a crown electrode. By touching the crown electrode with the finger of your non-watch wearing hand, a closed circuit is created that includes your heart and both arms. The electrical impulses that pass across your chest are measured and data is analyzed by the ECG app. This is a one lead, two electrode ECG test.

« THE LEGACY OF LIVE OAKSAY TACO! »