365 Days at the Ocala Police Department 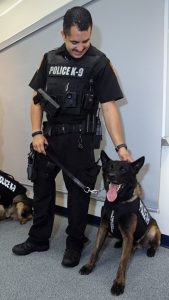 A year in the life of a member of the Ocala Police Department (OPD) is as eventful as you can imagine, and much of the activity goes unseen by the public. Each of us living and working in Ocala have a quality of life that is directly impacted by the actions of OPD’s integrated team of professionals. However, rarely are we aware of the results being produced by our local law enforcement officials on our behalf. In 2018, their impact was profound. The following accomplishments and highlights provide a brief look into what takes place over 365 days at OPD.

Provided by the City of Ocala

￭ Executed a five-hour standoff with an armed and dangerous suspect, resulting in an arrest with no injuries. OPD safely removed five children and their mother, a domestic violence victim, from the residence.

￭ Negotiated with a suicidal man hanging from the I-75 overpass, convincing him to climb back over the fence and enter the safety of a patrol vehicle, to be transported for mental health treatment.

Thank you to all of the men and women who serve the City of Ocala with courage, integrity, and character on a daily basis. Our community is a great place to live, in large part, because of your dedication.

To learn more about OPD, visit ocalapd.com or connect with us on social media.

« SAY TACO!MAKING A MARK ON OUR COMMUNITY »