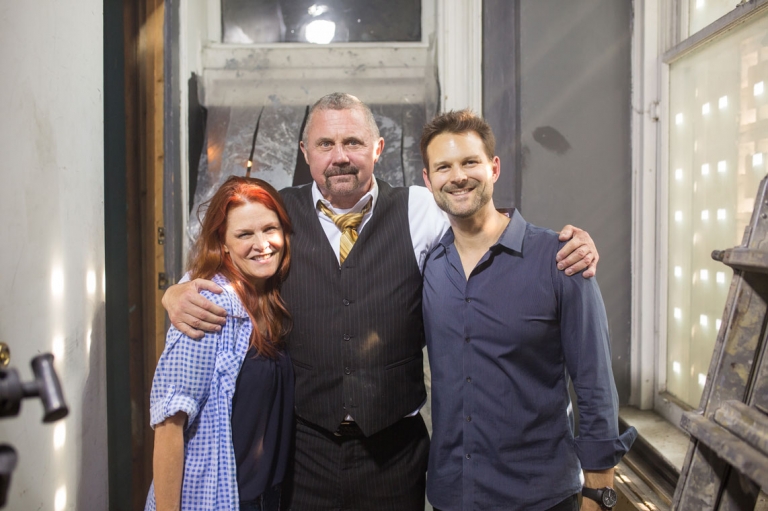 Historically, Ocala/Silver Springs, Florida has been considered a hub for shooting Hollywood movies – dating back to silent films. However, over the course of the last sixty years, the idea of shooting a full length feature Hollywood film in Marion County has been somewhat left in the pre-Technicolor black and white past. However, that all changed when independent filmmaker Anne Welles flew in from L.A., along with cast and crew, to shoot her full length comedy/horror feature, An Accidental Zombie (Named Ted).”Ocala Magazine had the privilege of being invited to sit down with Welles, along with a majority of the cast and crew members both on and off set, initiating Q&As, while making some fantastic new acquaintances. It was through this experience I not only found out An Accidental Zombie (Named Ted) was filmed entirely in Marion County, but how the film and the process has positively ignited this community.

B.B. (Brody Barcode): So Anne, tell OM readers a little bit about yourself?
A.W. (Anne Welles): I’ve been in the movie business now for about twenty years and I’ve been making films since around 2004. Before that I was a therapist and stay at home mom.

B.B.: How did you find out about Ocala?
A.W.: I came [to Ocala] for the Silver Springs International Film Festival a couple of years ago – for one of my short films. I completely fell in love with the town and I was really impressed by the festival itself. It was really very special and different, in part, because of the way they treated the filmmakers. At that time I started considering whether I’d be able to do this film here in Ocala. Last year, after coming again to the film festival, I decided I would try exploring the idea of making An Accidental Zombie (Named Ted) here.

B.B.: What was it that finally sealed the deal for you to say, “Yep, I’m filming this movie in Ocala?”A.W.: Yeah, so it was several things. One, we were able to raise some of our funds here. Two, we had lots of great locations for shooting and people who were willing to let us film in their homes and neighborhoods – a welcoming town that was willing to help us out with food and lodging. Three, the proximity we had to film-schools and Orlando. Places where we could get the resources we’d need – like for instance renting equipment.

B.B.: I got a chance to speak to a couple of people in town that were able to volunteer, as well as work as extras on your film. They told me you had mentored them during the Silver Springs International (Jump/Cut) Film festival just this March.
A.W.: So yeah, I was already down here preparing for this film and was asked if I’d mind being a mentor for Jump/Cut. It was perfect timing because I ended up meeting a lot of those people that are now on set. I mentored them and then reached back out to see if any of them would want to get on-set experience. Most of them took advantage of that as production assistants, behind the scenes videographers/photographers, background extras and volunteers. Although, we did cast Brittany Taylor Visser – who’s a local girl now living in L.A., as well as Anthony Gilardi, a local actor who’s also now in L.A. We also cast Cole Mruz, son of local business owner, Sheri Mruz.

B.B.: Do you feel like the local support from all of the actors and volunteers made a positive effect on your films budget?
A.W.: Immensely!

B.B.: So how did An Accidental Zombie (Named Ted) come about?
A.W.: So originally, I was trying to come up with an idea for a film that was marketable. So I thought, ‘Well, I should probably do something with zombies in it because they’re popular.’ And then I thought, ‘Zombies are expensive.’ [laughing] So then I thought, ‘What could I do with one zombie?’ And so I started to think about how that might happen and what that would look like. I tend to like a positive underlying message in my films – partly because of my background as a therapist and also as a mother. An Accidental Zombie (Named Ted) is a story about coming to terms with who you are. Ted is in denial about being a zombie. And to me, it’s sort of a metaphor for being in denial about whatever it is that’s going on with you.

B.B.: Looking back at this overall experience, would you consider shooting another full length feature film in Ocala?
A.W.: 100 percent! In fact, part of my goal is to be able to create a team that does this on a regular basis so at the end of this, we can all look at each other and go, “What’s next?” Based on our experience here in Ocala, it’d be my first choice.

Prior to sitting down with Anne Welles, I was able to catch-up with the 2017 Silver Springs International (Jump/Cut) Film Festival winner, Jake Jacobowitz. He states, “The film’s director, Anne Welles was one of our four mentors from the Jump/Cut contest. She invited us to the set to see the process at work. This whole experience has been extremely educational and inspirational.”I was also able to speak with Ocala independent actress/writer/filmmaker, Darian Mosley who states, “As a participant of the 2016 Silver Springs International Film Fest, I had the good fortune of making the acquaintance of filmmaker Anne Welles. Having her as one of the mentors for the Jump/Cut film challenge earlier this year was a great chance to learn more about professional filmmaking, as she offered many valuable bits of wisdom. When she invited myself and some of the other local production groups to be part of AAZNT the excitement level among Ocala’s creative community got amped! Experiencing the production process and working with such a large and well organized crew was very enlightening for me personally and I’m excited to put some of what I learned into practice!”

B.B.: So Brittany, tell us a little bit about yourself?
B.T.V.: So, I’m Brittany Taylor Visser, an actress from Los Angeles. I actually grew up in Ocala. I started acting at the Ocala Civic Theatre when I was seven years old and did shows there every year until I graduated from high school. I was in the IB Program at Vanguard (Go Knights!) I also sang with an opera company in Orlando throughout middle and high school, so I was performing around Central Florida all of the time. I went on to earn my BFA in Musical Theatre from Syracuse University and then I moved to NYC where I continued to study acting and perform in off-Broadway shows, independent film, on TV and in commercials. I lived there up until last summer, when I packed up my Prius and drove across the country to move to Los Angeles!

B.B.: How did you find out about the film and what was it about it that grasped your attention, compelling you to sign on?
B.T.V.: I found out about the film when I was referred to Anne by a mutual friend, Greg Thompson. He actually directed me in several shows at the OCT when I was growing up, including Pirates of Penzance and Cats as well as a short film he wrote and directed and filmed in Ocala, Swimming to the Moon. Thompson told me he had a friend, Anne Welles, who was producing a film and he asked me to put an audition on tape. This was 2 or 3 years ago, so I had been in contact with Anne for awhile. Then, I came home for the first Silver Springs International Film Festival, where Anne had a short film screening. I met her in person and we hit it off! I thought her script was so quirky and adorable and I loved the message of acceptance at the core of the film – acceptance of yourself and others. We stayed in touch as she developed the script, cast it and got funding. It was inspiring to watch her vision come to life and I wanted to be a part of it. We need more women in film, especially behind the camera, and I wanted to support her.

B.B.: How does work in NYC/L.A. differ from Ocala?
B.T.V.: In NYC and LA, you don’t get the same sense of community rallying together to support one project. In both cities, there are shoots going on all the time, all over the place.

B.B.: What were your thoughts on seeing how the Ocala entertainment scene came together in support of Anne’s film?

B.T.V.: To see so many people donating their time and resources, opening their homes and then getting so excited about the project and wanting to be involved – it’s a very special thing you would only get in a smaller community. It’s definitely inspired me to come back home if I ever wanted to film my own project!